Welcome to the new Lavender Hill website.  You’ll find all sorts of resources from videos, music streams and links to buy our records.  We’ll also be keeping our blog up to date with all our latest adventures.

We love music and playing our own material as well as rock and blues standards.  See you at the next gig! 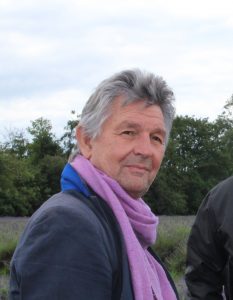 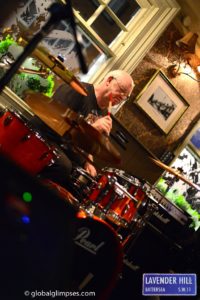 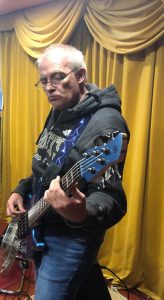 The story begins in March 2015 when Silver and his friend Andrew Baird started jamming on Saturday afternoons, acoustic guitars and a beer or two. Just a couple of mates playing through a folk/blues repertoire. Through the excellent, much-missed Horley Guitars shop they met Bob Kemp, a talented bass guitarist and the three members started appearing at open mic nights in Surrey. The name Lavender Hill was suggested by Silver’s partner – he and his father are both Clapham natives.

The band decided to look for a drummer, and Bob suggested Razz Betts. They had both played in Surrey blues band Hallelujah Junction. Their first gig as a four-piece was at the Horley Tavern in March 2016. Silver started bringing original songs to the band and after rehearsal they went into Barnstorm Studios with producer Rob Barry to make an EP. During production, Bob decided to go his own way and concentrate on other projects. Unable to locate a bass player, Silver had to re-learn an instrument he hadn’t played since his teens. Even worse, Rob Gwynne, a Canadian ex-pat turned up in March, just after the tracks had been laid down.

Andrew was finding it increasingly difficult to juggle his business commitments with rehearsals and after a few abortive auditions with keyboard players and guitarists, the band invited Rod Ashford, an experienced lead guitarist to come on board as a special guest. At one gig Andrew came back and played three songs on guitar while Silver did a stint on keys. In December 2018, after Razz fell out of a bus and broke his shoulder, with a gig booked, drummer Ray Elgy stepped in and did a fantastic job.

Razz, Rob and Silver decided to continue as a trio and with more original songs they started working hard on developing their sound. What you hear now, those high-energy, driving drums, strong bass right up at the front of the mix and ringing power chords were developed through the summer of 2019. That September the band, with enough original songs to make an album, went into the studio. They joined up with the brilliant producer Tom Hughes, and over three long days in November Razz laid down 16 drum tracks at Dragonfly Studios. Rob came to Silver’s home and recorded his bass parts.

As Tom was working to pull all the work together, coronavirus hit the UK. The studios had to close and work slowed down. Thanks to Dropbox and portable hard disk drives left in Tom’s letterbox, posted to and from individual members, the album started to take shape.

Then a side-project reared its head. One Thursday evening, after standing outside clapping for the NHS, a phrase came into Silver’s head. “We are not alone.” He went indoors and wrote ‘Dancing in Silence’, recorded in the band-members’ homes, produced by Tom in what had become the road-tested way of post, delivery and Cloud uploads. A video to raise funds for the NHS was produced and directed by Alex Horwood, a marvellous photographer and filmmaker who shot the band in Silverlea Woods (Silver), a field outside East Grinstead (Razz) and finally in Rob’s back garden. Two contributions to mention are Alex’s daughter Lilya who lights up the video, and Jan Spratt’s backing vocals. Check out the video on YouTube. It’s still getting views.

Now the album is nearly finished. Among the many friends of the band who have made a fantastic contribution: Dom Harvey, the supernaturally-talented axeman of Dead Before Mourning who for the past five years has mentored Silver’s guitar playing with gritted teeth, contributed a solo on ‘What Did You Do?’ that defies any known definition of praise. Chan-Chan Bartlett, whose backing vocals lift ‘Electra’ and ‘Lavender Hill’. Her rap on ‘Temptation’ is edgy and spine-tingling.

What’s next? Hopefully coronavirus and the government will allow live music back on. It’s what we live for. We badly want to gig and bring this album to life, whether on stage or through live-streaming. There will be new additions to our line-up. And we’re not done. Even as we finish one album, new songs are growing. Lavender Hill Rocks!